In a brief period of time, Virtual Reality became one of the most popular sectors of technology. It has arrived at the point that it is disrupting other platforms as well. For example cryptocurrencies and artificial intelligence. The virtual reality technology enables us to enjoy 3D applications.

Some may say that it introduces a virtual world that is so lifelike, it’s hard to make a difference between what’s real and what’s not.

Some time ago Virtual Reality made a presence in the gaming domain. Did you know, that the first VR head-mounted display was patented in 2016? Yes, that’s true. But the brand new Sony PlayStation 5 heads up display will be completely different.

This is why it might be a smart decision to add Virtual Reality stocks in your portfolio at this point. How to pick stocks in the Virtual Reality business the right way? Be early and invest in new trends before others do.

If you are planning to invest in VR stocks, you need to invest smart. That’s why you must watch the stocks closely. These top VR-markets include software, hardware, workspace, gaming console, and smartphone. 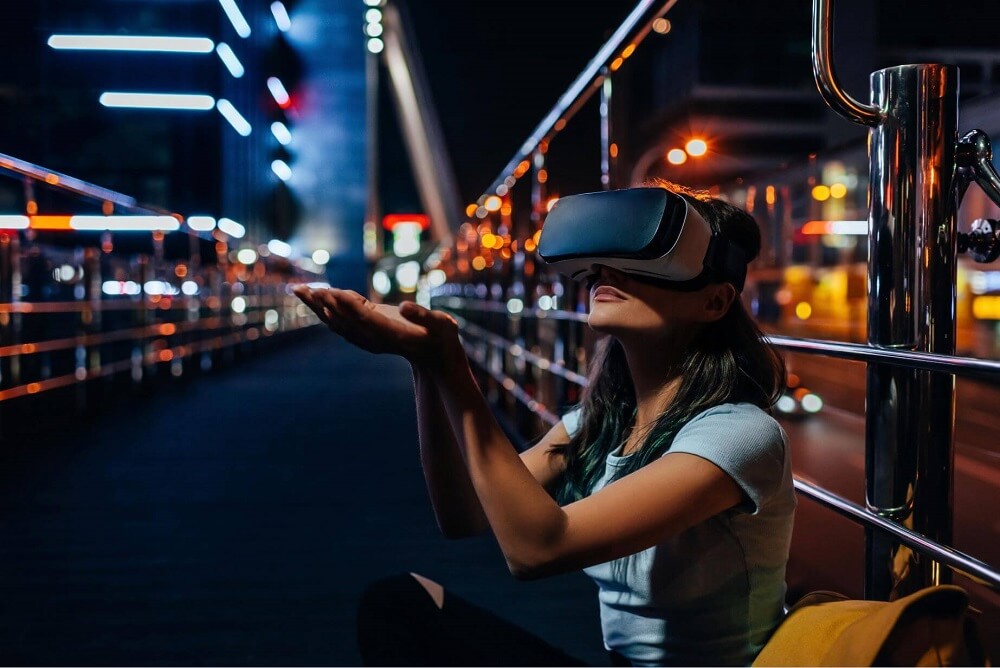 Important: Investing in VR stocks needs to be seen as a long-term investment with incremental buying during market consolidations. Staying with the most profitable market leaders is typically the best, while investments in speculative penny stocks in this segment should only be made with small amounts.

Most people know Amazon for shopping items online by using their e-commerce store. But when it comes to virtual environments, then Amazon shows it’s strengths with cloud services, IT infrastructure, and streaming videos. For sure, Amazon is the leader in e-commerce, and over the years, Amazon will grow and grow.

Other stores completely missed the chance of selling things online, and now it is hard to get the clients back. That’s an advantage for Amazon, and their expansion strategy already pays out. In the past, they aimed to make losses every quarter because they invested all their money into expansion. And now they can earn the fruits.

The same goes for cloud technology. Many websites and SAAS services already run on their cloud. And what will the future bring? Well, new shopping apps could be VR-based, the Amazon prime movies could be shown in VR ready, and other technologies could be implemented as well. The potential is unlimited.

Everyone agrees that Apple has a strong place in the market. At least in the United States. With a market share of 44.8% in December 2018. The chances are that you also have an iPhone, iPad or another Apple gadget.

Apple did not make any clear announcements about its plans with VR. But tools like Apple Playgrounds show that they are on the fence for cool new platforms, be it augmented reality or other industry leading technologies.

Still, with the VR wave in mind, people expect Apple to step into the game at the right time. Apple is not only a great virtual reality stock to consider. It’s one of the best-performing stocks in the last eight years.

What is the alternative to Apple’s iOS? Sure, it is Android. And the company behind is Alphabet alias Google. From a global perspective, most users around the world use Android-based devices. In the smartphone world, this a ~75% global market share is a huge number.

Plus, Google is very bold right now when it comes to the virtual reality and augmented reality world. The Google Glasses where a good start and now, the companies develops more and more industry leading products and services.

It may sound surprising to find this out. Facebook is one of the top virtual reality stocks when it comes to VR hardware. At first, far away from classic Facebook apps. Not only does Facebook have more than 2 billion users, but it’s also at the top of the market thanks to the Oculus Headsets.

The company has strong brand recognition, consumer base, and financial muscle. For them, this was a sign that they had to introduce the VR into mainstream adoption. Furthermore, Facebook is attempting to add VR in social interactions. This could help them sell the headsets to the users of Instagram, and Facebook Messenger.

Facebook fully recovered from its lows in December 2018 and went from ~$123 to ~$200 in just four months. This is a return of about 40%. Currently, the shares are below all-time-highs again and worth watching during earnings season.

Microsoft is a crucial stakeholder when it comes to the Virtual Reality market and virtual reality stocks. The company improved significantly over the past few years that it was active. The times of Bill Gates are over, but Microsoft is still a market leader. The X-BOX one is an e-commerce evergreen, and a new XBOX will follow once Playstation 5 hits the markets.

There were some worries at some point that Microsoft was a dying technology giant. However, it came back to life and dominated the consumer tech frontier. Microsoft provides digital content using the workspace environment.

It may even provide holograms on a specific physical area. Watch the stock closely and remember that we talk about long term investments for virtual reality stocks.

Qualcomm Incorporated makes its presence known within the Virtual Reality sphere. It provides prerequisite sounds and visuals, as well as solutions for intuitive interactions. All these are necessary to create a superior Virtual Reality experience. Qualcomm is part of most VR-hardware.

The Snapdragon VR SDK offers its developers full access to advanced VR features. These will apply on any VR device marked Snapdragon. Furthermore, the VR SDK offers a break from the trouble of creating VR products. It provides new standards of VR layering, all while enhancing faster photon motion.

Qualcomm virtual reality stock made a huge jump from ~$57 to ~$87 in just a couple of days. That happened in April 2019, because of 5G news.

No matter what part of virtual reality we talk about. Be it Oculus, Google Daydream, project Morpheus, headsets, or smartphones – all have one in common – they need processors and semiconductors. A game is being developed on a workstation, a headset does not work without the technology inside, and the same goes for all those trending products.

Intel is one of those technology companies and stocks that will benefit from the developments. Sure, Intel is a heavy tanker and does not move that fast like other companies. But that’s true for upside movements, and also for the downside. Intel is a substantial investment and addition to a portfolio. They have a market cap of >250 billion and stable earnings.

Augmented reality and virtual reality experiences are impossible without their technology, as mentioned above; this alone is an argument to have it on the top 10 list of the best virtual reality stocks to buy now. Besides, they now develop 360-degree cameras, including software for professional sports events like NBA, NFL, and the Premier League. Have you ever wondered how those fantastic experience during those events is possible? Intel’s technology is the answer.

We all know about Sony PlayStation and XBOX-One. But how are about the companies behind those gaming consoles? HTC is the leader in the Asian market. For this reason, it is worth to consider this Taiwanese VR stock as a virtual reality stocks investment.

Vive VR items are rivaling even the Oculus from Facebook. For example, Oculus is more appropriate when. But HTC’s Viva VR can handle more types of games. The growth of the company also offers promise for the future. You should be aware of the fact that HTC Corp. is not listed at the NYSE or NASDAQ.

Tencent has its core strength in the video games and social media app sector. The company is located in China, and their stocks are available to trade over the counter (OTC). The chances are that you played one of their most successful games like Honor of Kings, Game for Peace, or League of Legends.

If you are located in the United States, then WeChat might not get your attention yet, but in China, WeChat is the biggest social media platform where users can download apps and where they meet and network.

While those two VR adoptions already make Tencent an excellent virtual reality stock investment, their stakes in other gaming companies like Ubisoft and Activision Blizzard finally make them worth it to add them to the portfolio. Gaming is a major trend where virtual reality will grow fast soon. The market leaders will win the race, so Tencent is one of the most promising stocks in the VR-sector.

Vuzix makes AR and VR products for both the enterprise and the consumer market. It is the reason why they are so successful right now. Vuzix focuses on creating wearable display devices. This way, it will enable the users to interact with the digital environment from within the Virtual Reality area.

There are different market fields of virtual reality stocks that investors might take an interest in. Indeed, right now, gaming is the most popular along with the smartphone sector. Still, it is not yet sure how VR will grow in the future. Some VR stocks already belong to the best dividend stocks to buy. It is only a matter of time until the best Wall Street movies can be seen with VR-equipment in ultra-high resolution.

Augumented reality goes further and who knows how things go in the future. Most of the companies listed in this best virtual reality stocks article are powerful even outside the VR world. The best way to go would be to put all those stocks on a watch list. Once the next major market correction comes, those stock with the best dividend payments and lowest risk should be considered.

Investing in single stocks is always risky. This is why you need to pay attention to the stocks. This way, your business will be able to gain an edge. And remember, all investments should only be based on your own decision. Make sure to contact your bank before investing.