​More trades, higher win rate, and bigger profits, that’s the idea behind Jason Bonds's new trading service called The Weekly Windfalls. But is it worth it?

This Weekly Windfalls Review covers all angles of this stock picking service.

I take you by the hand guiding you through the service talking about the trading strategy and the various options within the Weekly Windfalls dashboard. 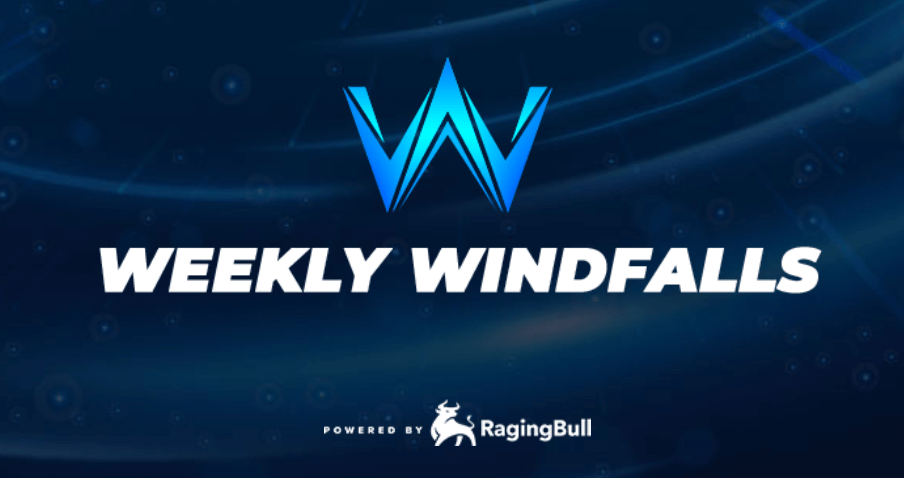 ​Transparency: When you buy certain products from some of the sites which we link to, we may earn a small share of the revenue.

The Weekly Windfalls options picking service was started in July 2019.

Until then, Jason mainly traded small-cap stocks and alerted Jason Bond Picks subscribers when a new trade was made.

His fishhooks and rockets trading strategy at Jason Bond Picks made him more than $360,000 in the first half of 2019. He donated all the money he made to charity.

The weekly options windfalls made him more than $150,000 in a much smaller time frame so far by trading options.

The idea behind Weekly Windfalls is:

The goal of Weekly Windfalls is to collect a paycheck every Friday or sooner.

That’s being done by trading options that expire within about a week to collect premiums of them.

And the amazing thing about this is that you can see his trading account all day long.

Do you know Shark Tank?

Well, then you know all about Daymond John - his net worth was estimated at US$250 million in 2016, and he is CEO and founder of FUBU and The Shark Group.

Daymond and his team vetted several traders that they could partner with.

And the only one left when the dust settled was Jason Bond. 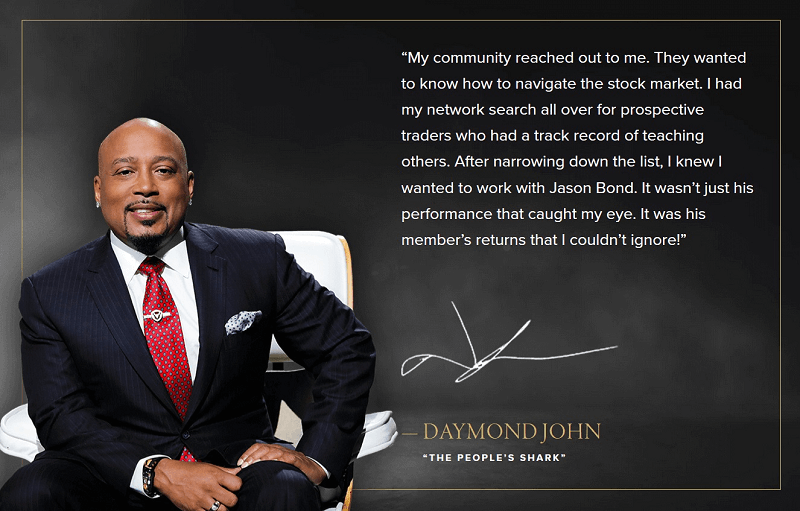 October, there is a great event with Jason and Daymond.

They are sitting down on camera talking about Jason’s strategy at Weekly Windfalls.

The interesting thing about Jason Bond Picks and Weekly Windfalls is that Jason shares his trading screen all day long with his subscribers.

That means that you can see his portfolio, plus you receive an extra email alert when Jason makes any new trades.

He also teaches live by using his TD-Ameritrade account. 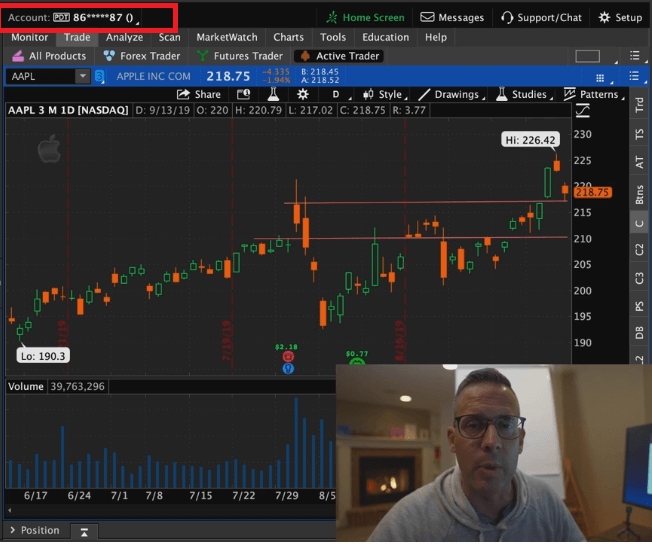 The awesome thing about Weekly Windfalls is that stock- and options prices do not really care about when Jason is making a trade on big names like Apple or Amazon.

That means that when an alert at Jason Bond Picks is being sent, then the price sometimes reacts heavily on strong volume. That makes it hard to copy his trades.

But with Weekly Windfalls, it is entirely different. Jason trades stock options on companies like Apple (AAPL), Facebook (FB), and Netflix (NFLX).

Those stocks and stock options are that liquid that the market doesn’t care about if Jason Bond is buying or selling 100 contracts, or not.

And that’s one of the main differences to his Jason Bond Picks service.

If you are looking for an opportunity to copy Jason’s trades, with Weekly Windfalls, it is possible.

Anyhow, Jason strongly advises you not to copy his trades directly and instead motivates you to learn and understand his strategy first.

Then, once you grasped the whole concept, it should be possible for you to do exactly what he is doing, but on your way without paying him for access to his service.

What Exactly Is Jason Bond Doing in Weekly Windfalls?

Weekly Windfalls is all about selling options – calls, and puts - to collect premiums by using a vertical spread for this.

​Being used when speculating on rising prices on the underlying stock.

This is also known as Bull Put Options Strategy.

Being used when speculating on falling prices on the underlying stock.

Vertical spreads allow Jason to use a smaller account and to control his risk trading options. 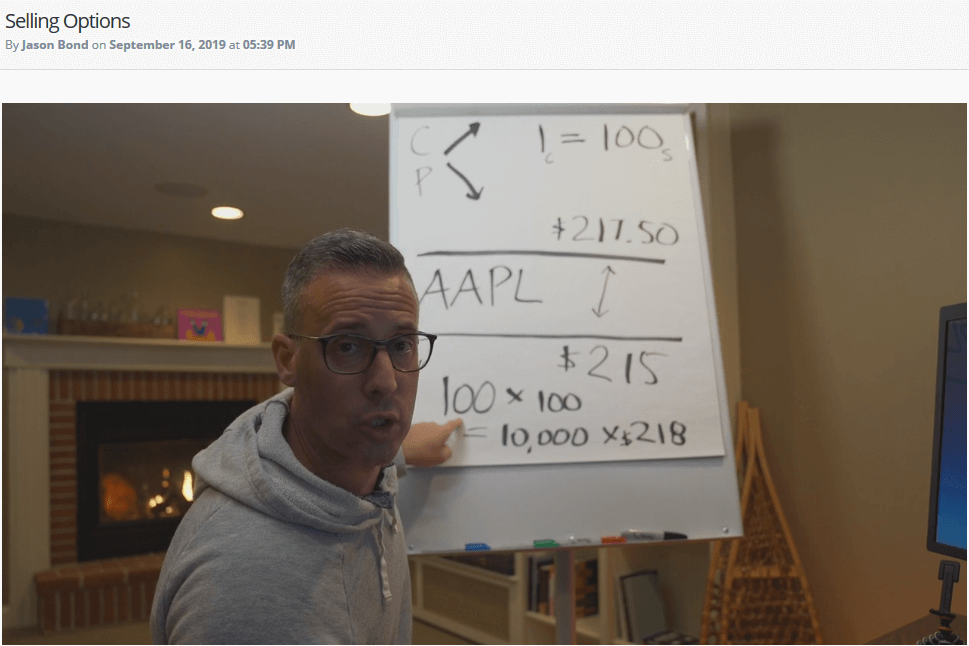 So, those are the options trading strategy behind Weekly Windfalls.

​But let's get back to Weekly Windfalls and procced with risk limitation details and performance.

It is essential to understand this point.

Instead of naked selling of calls and puts, Jason always limits the potential loss by adding a protective options position with another strike price, but the same expiring date as insurance.

I repeat –unlimited risk! Never do that! Jason never does it. Instead, he is using protective positions as insurance.

That means that you open both positions at the same time when you send the order out to your broker. There is no delay in between.

It is important to understand the whole concept of options trading first before even considering making a trade.

There is so much that can go wrong if you do not know what you are doing.

But before proceeding with the Weekly Windfalls review details regarding the options trading guide, I like to talk about the performance first.

I did start auditing Weekly Windfalls soon after the launch in the summer of 2019.

I wanted to avoid publishing a review about Weekly Windfalls while I haven’t had enough data.

Now, a few months later, I have a much better understanding of his service, the performance, and the trade logic.

It’s incredible how powerful this strategy is. Most weeks, he makes extraordinary gains from trading his strategy.

But I also had seen Jason realizing huge losses two times during my auditing period when the market was falling like a rock.

So it is not a one-way street.

He makes profits most of the time, but sometimes he loses money.

And this is authentic because that’s how trading goes.

Sometimes you win, sometimes you lose. The most important thing is that in total, your account is up.

October 8th, 2019, only about three months after he started his services, he sent out a performance screenshot from his TD-Ameritrade account.

Once you signed up to Weekly Windfalls (~67% discount), you gain access to your dashboard.

There you have five main navigation items.

Let’s proceed with the Weekly Windfalls review by talking about all of them. 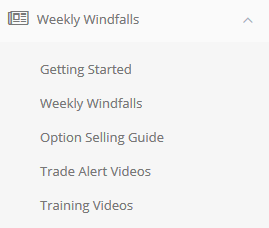 The Getting Started link directs you to the introductory video.

Watch and read it once, and get to the next one.

Jason researches the stocks, sends the trade ideas before the market opens, and informs you once he finally executed the trade.

Along with the email-alerts and desktop push-notifications, you will also see changes in his account right within his portfolio stream.

Click on it, and you will see the current positions and some notes on the right side.

As lined out above, Jason is trading calendar spreads, so you always see two rows in his portfolio that belong to one trade idea.

By buying and selling options with the same expiration date for the same stock, Jason limits his potential losses and controls the trade. 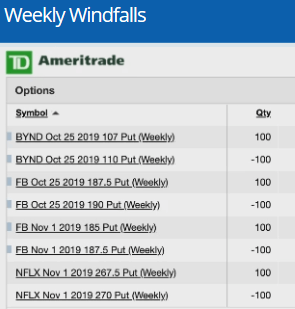 As you can see in the list, there are only huge companies traded.

Even with Jason’s colossal buying power trading 100 options at a time for various stocks, he does not move the market with his orders.

So, no matter if you pick up this trade 1 minute later, 5 minutes later, or a few hours later –  it just doesn’t matter that much because most of the time, you can open positions similar to Janson’s.

Options are about essentially buying a contract to control a certain number of shares over a certain period.

You need only a little money to control a lot number of shares. But before you hop right into the game, watch all those videos within this category.

It is important to understand the whole concept first. Otherwise, you put your money at risk.

Remember, you pay your subscription fees to get a better understanding of the concept, see the trade alerts, and get educated.

And this navigation item is where you should focus on in the first few days or even weeks. 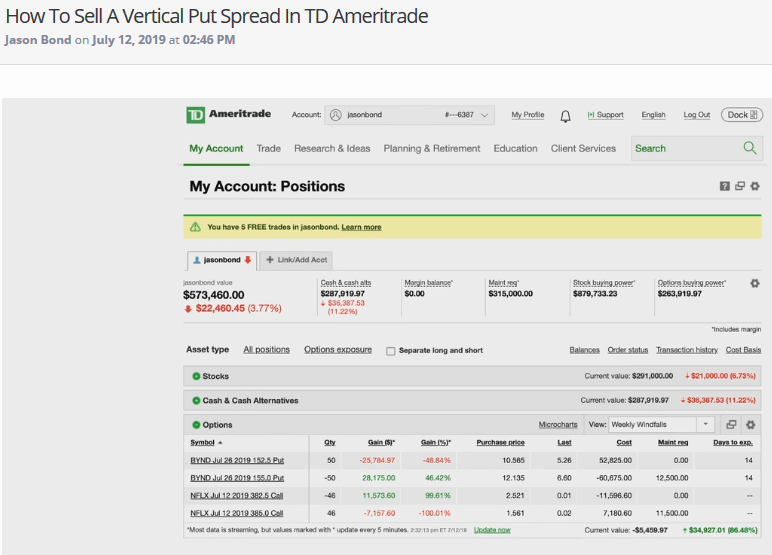 Start with this one and make your way through all videos listed. It doesn’t take that much time and is worth it!

For example, in this first video, Jason guides you through an order set up for his Tesla trade in his real money trading account.

He does it step by step, and you will always see the last four digits of his trading account number.

I think that’s important because he proves that he is trading with real money in his real trading account for real profits.

There are so many educators out there selling trading courses. But only a fraction of them proves that they really trade.

Luckily, Jason Bond belongs to the few who prove that they trade with real money.

Again, this section is the most important one, and you should make your way through all those videos and articles.

It might take a week or so until you finished it, but it is worth every single minute.

It’s helpful to learn more about why he is choosing what contracts.

The clips have a duration of about 5 to 10 minutes.

The Weekly Windfalls training video currently includes one video with a duration of about three hours.

Jason also guides you through his TD-Ameritrade account, doing some scanning and talking about stock selection. 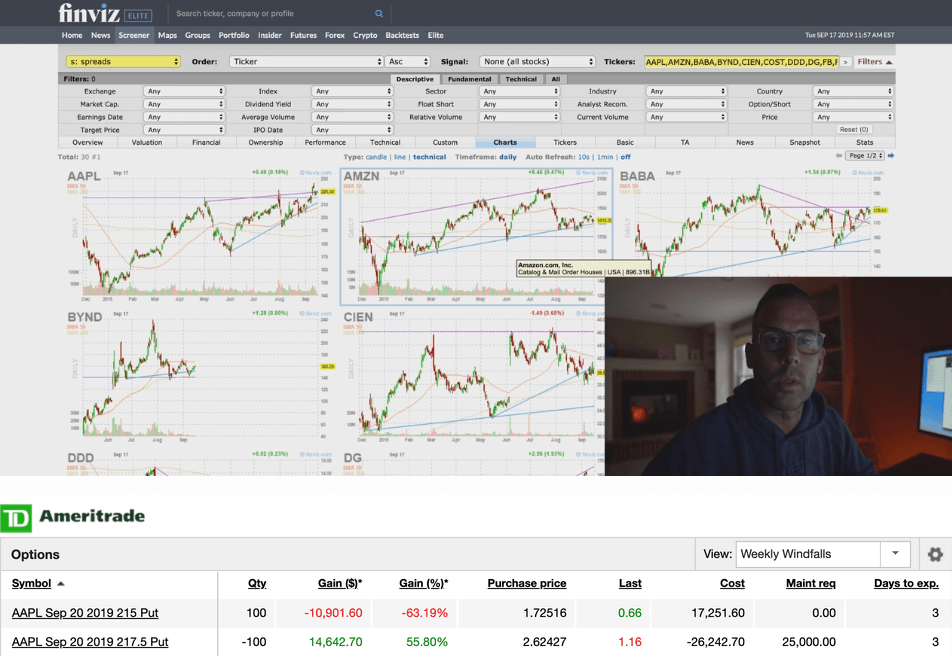 I’d proceed with this video once you finished the getting started the video.

This service exists for a few months now. What I have seen in the past months is that Jason’s trade selections are fantastic and that he is making a lot of money with it.

I like the fact that the strategy is scalable. Jason trades 100 contract lots right now, while anybody can scale this from 1 contract minimum to even more than 100 contracts.

But options trading is risky, and it is the most crucial aspect to exactly understand what to do and what to avoid.

I always recommend starting on a paper trading account until you make consistent profits.

Also, I recommend starting with a much smaller contract size. Lots of 100 stock options contracts is a huge number.

If you start with real money, start with one contract and increase the number of contracts slowly.

Jason made $50,000 on average any single month during the last quarter, trading 100 contracts with each trade.

So, even trading only one contract would have led to a profit of $500.

And if you put this into the right context seeing that Jason really makes that money trading options on large-cap stocks reveals that the subscription price is fair.

I also like the fact that those trades can be executed from small accounts.

There is no risk by the pattern day trader rule since the service is not about day trading.

Also, even the big brokerages like TD Ameritrade, E-Trade, and Charles Schwab now offer options trading for just a few Cents without any base fee.

​Weekly Windfalls stands for copyable options strategies and a steep learning curve. ​​​Trades can also be executed with small accounts and minimum trade size of one options contract.

​Alexander is an investor, trader, and founder of daytradingz.com. After devoting many years to educating himself on powerful day trading techniques and effective investment styles, he started trading and investing more actively. In the past 20 years, he has executed thousands of trades. In 2015, he began writing articles about trading, investing, and personal finance. He is very passionate about sharing his knowledge and strives for success in himself and others. Alexander has been featured on Benzinga, Rockstar Finance, and ESI Money.