Fly Me to the Moon, let me play among the stars, and let me see what spring is like on a-Jupiter and Mars… Frank Sinatra’s Fly Me to the Moon lyrics may become true faster than we ever thought. Space stocks are booming these days, and the question of how to buy SpaceX stock is one of the most frequently researched ones. Wouldn’t it be awesome to have a specific SpaceX stock price and an exact SpaceX IPO date? That would be awesome, but so far, SpaceX is privately held, and we still don’t know yet when we can invest in Elon Musks’ megaproject.

This article provides details about the newest developments around the SpaceX stock price and SpaceX IPO. We also take a closer look at the main competitors and alternative space stock investments that are already publicly traded. 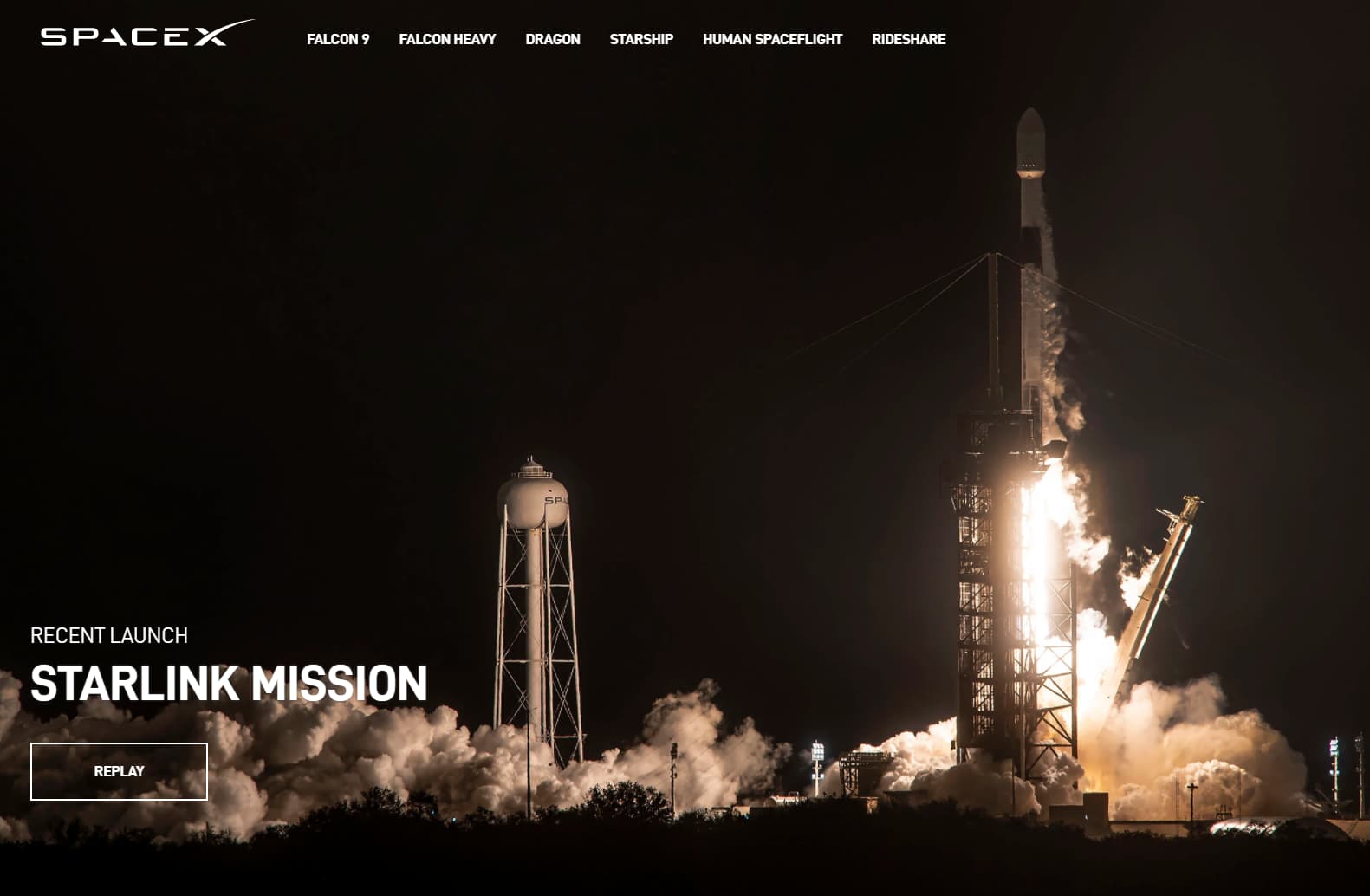 Elon Musk founded SpaceX in 2002. SpaceX wants to colonize Mars and make space tourism affordable with $20,000 and lower. Sure, affordable is relative, but if you compare it to the expected price of Virgin Galactic with $250,000 per seat, well, then $20,000 sounds like a bargain.

What is SpaceX worth? In February 2021, Elon Musk said that it is now worth a whopping $74 billion. SpaceX raised $850 million of new capital by selling private stocks to investors. Elon Musk is known for being shy when it comes to the SpaceX IPO. Only an IPO would give a much better understanding of the company’s value. Elon Musk simply doesn’t need the capital that an IPO would bring into company accounts, and he would give a part of company relevant decisions to investors. The SpaceX stock price would then dictate what to do and when.

But here is the deal, Starlink, a venture of SpaceX, will probably go public soon.

Elon Musk announced that he expects to go public with Starlink once they have all relevant numbers in their hands. Starlink is the by far most profitable SpaceX subsidiary, and it is an exciting alternative to investing in SpaceX directly.

The plan is to send a minimum of 10,000 satellites to orbit and provide high-speed internet worldwide for $99 per month or $499 pre-paid for a year.

If you now think that you may have just a few bytes of speed when connecting to a satellite far away, well, then you are entirely wrong. The data speed varies from 50Mb/s to stunning 150Mb/s with a low latency of about 20-40ms.

Right now, you can pre-register for Starlink access, and SpaceX already said that more than 700,000 individuals within the United States are interested in using Starlink for $99 per month.

Alone those who registered so far would lead to annual revenue of $349,300,000. It is expected that Starlink could have a revenue of $30 billion per year, which is currently much more than the space rocket business.

Therefore, an investment in Starlink could be an even more attractive investment compared to SpaceX.

Right now, we don’t know that much about the company financials since neither income statements nor balance sheets are publicly available.

CNBC reported that SpaceX raised the last $850 million at $419.99 a share, which boosted the companies valuation by 60% compared to the previous funding round in August 2020.

If SpaceX would go public right now, you can expect that investors would be willing to pay much more than $419.99 per share.

Sir Richard Branson founded Virgin Galactic with the mission to use space for good as the world’s first commercial spaceline. From their operational hub in New Mexico, Virgin Galactic wants to launch regular spaceflights for individuals. The shares are already publicly traded and available via the stock symbol SPCE.

Virgin Galactic went public in October 2019 and aimed to be profitable by 2021 after the first commercial flights in 2020. The IPO was done via SPAC under the ticker IPOA, which then converted to SPCE in 2018.

From here, the stock may fall to $10 again, or it may go up to new all-time highs. That mainly depends on the upcoming news about when public flights will become possible. Right now, Virgin Galactic doesn’t make money and reported negative earnings per share of $-0.31 and a total loss of $275 million after a loss of $213 million the year before.

But the reason why SPCE is tanking is probably the repeating delay of space travels. The test flight planned for February 2021 was rescheduled for May 2021. So, even if the test flight will happen in May, individuals will not start before 2022 into space.

Right now, I see it this way, the stock is at $30 per share right now, right in the middle of the total price range. If Sir Richard Branson succeeds, the price per share may go up to $100. If he fails, the potential loss is limited.

Holicity Inc. is part of the space industry and has a market cap of $397.50M and 30.00M shares outstanding. But HOL is just a special merger acquisition company (SPAC). The rocket maker Astra uses the SPAC to go public in the 2nd quarter of 2021. The IPO will bring in new capital that can be invested to develop the best space rockets and bring spaceships to orbit and beyond.

Astra will be listed on the Nasdaq via the stock symbol ASTR. Before the official IPO, those who own HOL stocks will see the stock symbol convert from HOL to ASTR once the IPO was successful.

HOL currently trades at about $13 per share, with its high at $22.47 in February 2021. Like with SPCE, if the company succeeds, the stock price can go to the moon, and the risk is limited.

Here is yet another SPAC deal. The company Rocket Lab wants to go public via a merger with SPAC VACQU. You need rockets to fly to space, and companies like Astra and Rocket Lab can make the dream of flying to the moon possible for individuals. Rocket Lab also wants to raise more capital with their IPO (deal valued at $4.1 billion), and some call them the Mini-SpaceX that investors can buy today.

Rocket Lab plans a Neutron rocket with a first launch expected in 2024.

With a share price of $12, VACQU is currently just 20% above the average SPAC price of $10 per share. The IPO date for Rocket Lab can be as soon as Q2 2021, and the ticker symbol at Nasdaq will be RKLB.

Who else can do it if not Elon Musk? His vision and ability to make the impossible possible are one of a kind. Once investing in SpaceX and Starlink becomes possible, I’ll invest immediately. It doesn’t matter if the price per share is $10 or $1,000. You can either buy one stock or 100 to invest $1,000. The important thing is that the chances are that the capital invested will become more capital. Like Bitcoin, 10 years ago, no one believed in Bitcoin, and now it is a multi-trillion dollar business. IMO the same goes for SpaceX. It may take longer than just 2024 that Elon Musk announced to make space flights available to the public. The point is that he has proven that his rockets work. He flies to space already, and it is just a matter of time until we can also fly to the Moon or at least to orbit.

New technologies and product development achievements make it possible to start new ventures, built an even better spacecraft, boost the satellite business, and make the experience of exploring space even better. Currently, there are not real active choices when it comes to exploring space for individuals. But this can change fast. You can register with some personal data for most of the offered ventures. Those who want to invest in space stocks should keep a close eye on the valuation, data and audience insights.

The Starlink satellite business is probably the first real profitable space business we can invest in. Satellites that allow internet access everywhere is a business model that everyone understands, and it may replace the way we currently connect to the internet. The International Space Station still seems far away, but falcon 9 rocket launches happen frequently, and in a few years, we all can be Astronauts.

How to Analyze and Trade SpaceX Shares

As an exchange-listed company, SpaceX would be one of the best stocks to buy now. The best stock analysis software can be used for a more extended due diligence process before making the final decision.

Then, you can use the best stock trading apps during the IPO. The chances are that you get some stocks at the original IPO price. Alternatively, you can buy and sell your preferred number of shares on the IPO data or at any time later by using the official stock ticker symbol within your trading platform.

Once invested, you can use your brokerage account or one of the best stock tracking apps to manage your positions within the portfolio.