When it comes to day trading for beginners, having the correct strategy is crucial. Day trading is one of the most difficult endeavors to take on, but if you have the right day trading strategy you can find it to be extraordinarily rewarding. By using proven day trading strategies, you will increase your odds to become successful. 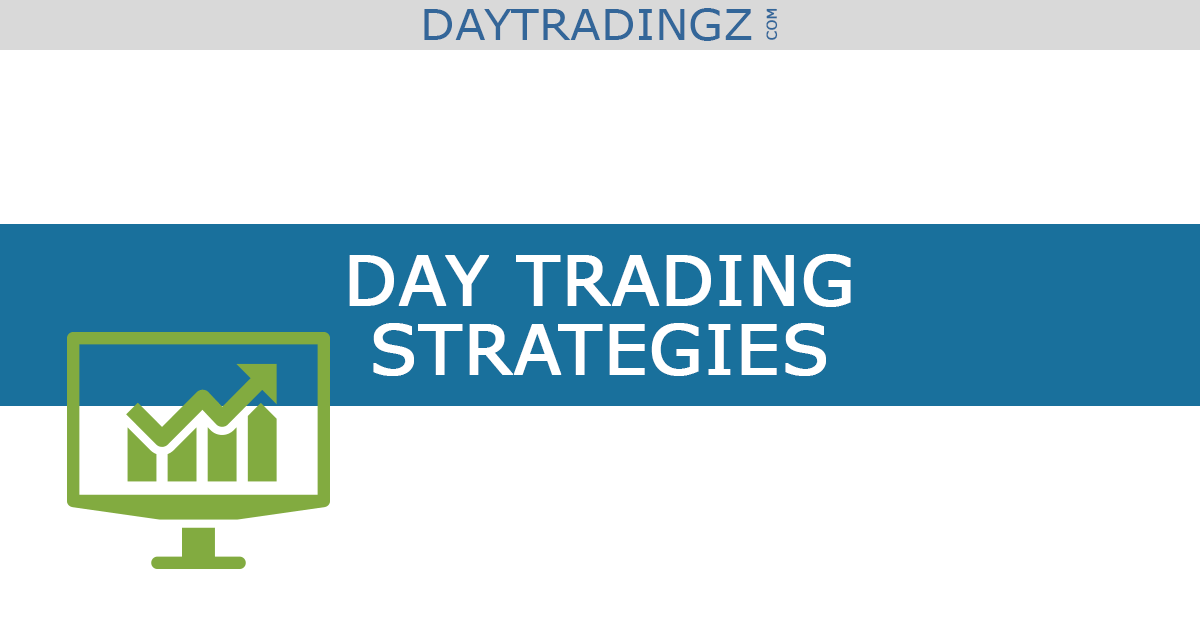 Pivot points have been used for decades by day traders in the commodities pits, identifying potential support and resistance on short-term moves based upon the high, low, and close of the previous trading session.

There is typically what is known as a “Pivot Point”, which should be the median of price for the trading session. Underneath that will be up to five supported levels, and above it five resistance levels.

There are no pivot point trading secrets, but as a general rule they work because so many people follow them, and they also use a bit of a “reversion to the mean” attitude. In general, the farther you are away from the pivot, the more likely you are to see a reversal.

Traders will look to trade markets via support at the supported levels, or resistance at the resistance levels. This tool is included with almost all trading platforms.

Notice the chart below, as I have drawn three circles at varying points of interest. The blue circle, shows the first day opening at the “resistance one” level, and clearly rolled over to not only find the “pivot point”, but even fell as low as “support one.” 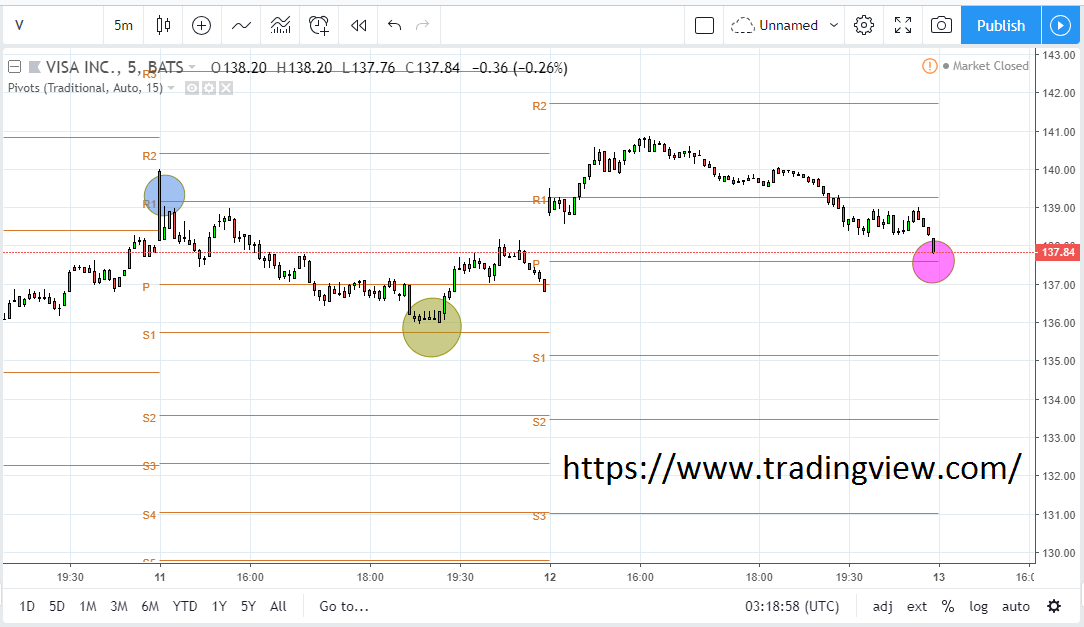 Looking at this overbought condition, traders came in and shorted Visa, drove it towards the pivot point, and even down “to support one” (gold circle) where bullish traders used it as support.

The next session, Visa started at “resistance one”, and even rallied from there. But as you can see by the pink circle, price did in fact go back to the “pivot point” for the session. Think of the pivot as a magnet for price. A strategy like this can also be used for day trading futures.

While there are an entire plethora of reversal trading strategies, by far the most simple is the three candle strategy. This one can also be used as swing trading strategy.

By waiting for these types of set ups, you are easily able to define your risk, as if we blow past the three candles in the wrong direction, you get out, but it allows the market to prove itself as far as a change in attitude.

Looking at the attached five minute chart of J.P. Morgan, you can see that price had been shopping around for some time during the day.

We found a bit of support at roughly $100.25, and where I have drawn the blue circle, you can see that we have a long red candle that was followed by a relatively small candle.

This small candle shows real indecision and lack of follow through by the sellers. We turned around to rally in wet ended up being a relatively long green candle, and this was the beginning of a move much higher.

If we had broken below the lowest of the three candles, then the trade would have been stopped out.

Please note that the longer the first and third candles are, the more impressive the move will typically be.

In this example, you can see that the second candle was extraordinarily short, and while the candle itself doesn’t look that interesting, it does show that the sellers were suddenly running out of momentum, and therefore conviction. 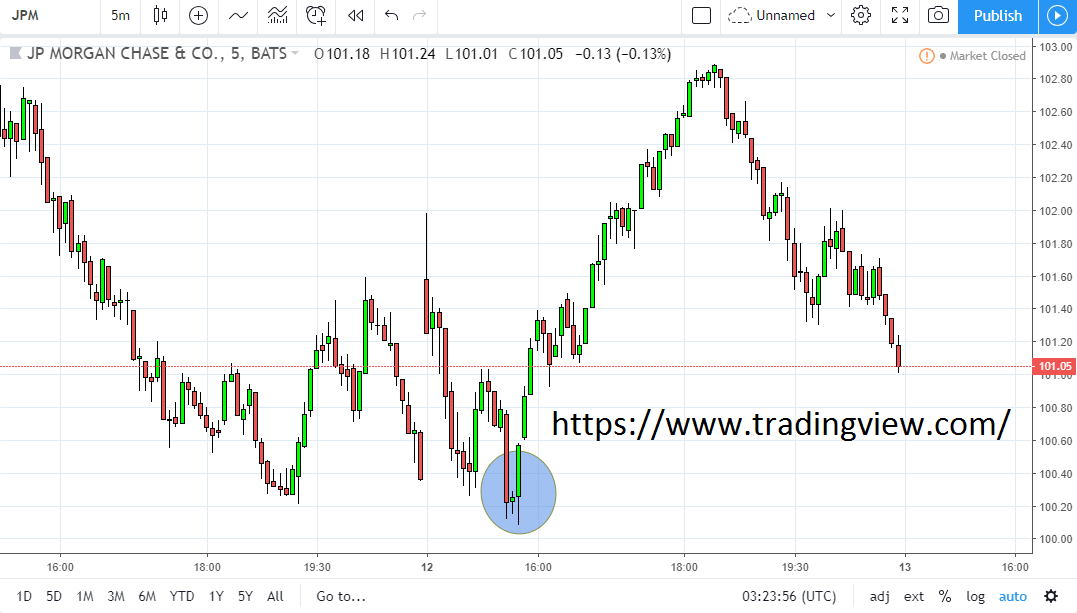 It’s especially interesting to see it at such a close level to the $100 handle. That of course has a certain amount of psychological significance to it as well. In a sense, you could probably look at this strategy as a momentum reversal strategy.

In other words, the momentum was negative in this example, and then the momentum turned around to the upside. This is a classic trade signal.

The trade signal itself typically will begin a long run, and in this case J.P. Morgan even reached the top of the chart again near $102.90, which had been the most recent high. This is an typical trading strategy based on mentioned in the post technical analysis explained.

Stock markets gap quite often, so this is very popular. As you can see on the attached chart of Apple, the stock gapped lower on strong relative volume at the beginning of the day.

On the 15 minute chart, traders simply wait an hour to see what the trading range is going to be for the session.

If we are still below the gap after the first hour, it is generally assumed that we will not blow through that gap. In this case, that being the case, we are looking to short Apple. As time went on, we broke down quite a bit and went much lower. 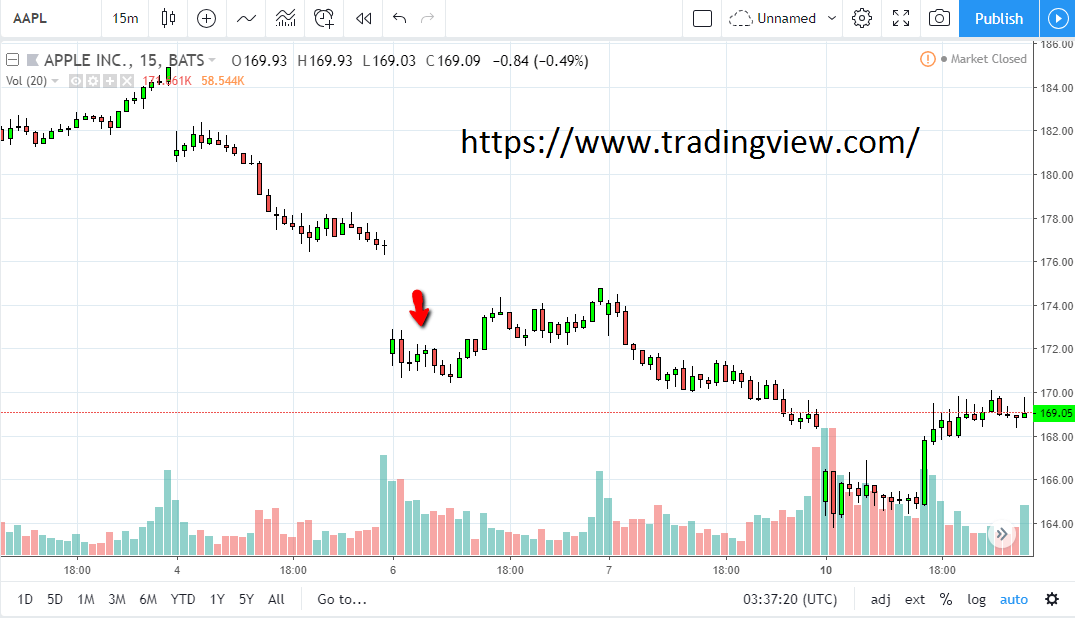 The entry to the stock can be fined tuned using a candlestick entry such as a shooting star, but where I have marked on the chart you can see that we have spent an hour and haven’t bothered to fill the gap or break above it.

The alternate scenario is that you turn around and you break through the gap to the upside, which is a very bullish sign. If the stock gapped higher, then of course all of the exact opposite parameters would come into play. Once a stock is filling the gap, as a general sign that the power of that sudden move is gone.

Trade Ideas is my favorite stock screener. The pre-configured gap scans are already well defined. And with a few mouse clicks, one can configure its gap scan individually.

Breakout trading is popular as well, because it uses something that everyone likes: momentum. The idea is that the market consolidates for a while, and then suddenly makes a much larger move.

This shows momentum either shifting or continuing with what the market had done previously. Think of it this way, it’s much like a spring being coiled, and releasing energy.

Eventually the buyers or sellers find themselves on the wrong side of the trade, and then need to go in the same direction to get out of the market.

Breakout trading relies on the ability to notice consolidation and to clearly plot support and resistance. In the attached chart, I have an example of a break out in AT&T.

It’s a 15 minute timeframe chart, which had seen consolidation as denoted by the blue rectangle. You can see clearly that we had broken out of that range and rally towards $30.40 rather quickly. 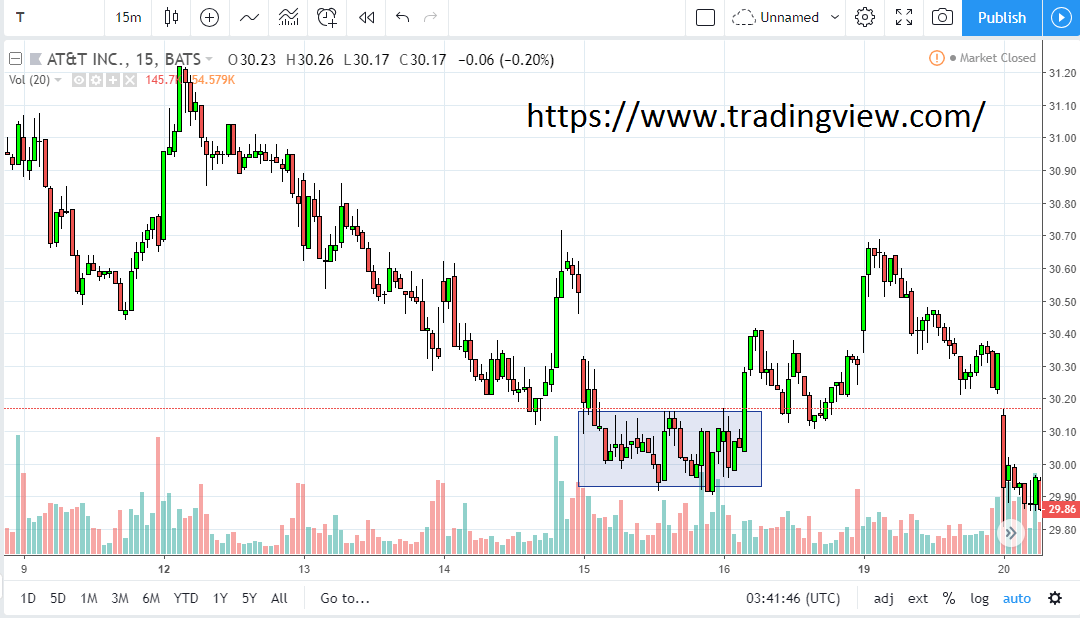 Something that is interesting and should be noted is that we pull back to where the top of that consolidation had formed. We bounced from there in continue to go even higher.

That’s quite common to see, because those traders who were short at the top of the rectangle are more than willing to buy back those shares at breakeven after getting blown through like that. When they do that, it pushes the market higher.

Beyond that, there are traders who missed the move and are wanting to jump in.

As far as stop loss is are concerned, as a general rule people will do one of two things: they will either put the stop loss on the other side of consolidation, or they will put it in the middle of consolidation with the assumption that if we pull back into the consolidation and wipe out half of the height of the pattern, it’s probably not going to work out.

This is what is known as a “false breakout”, something that does happen but statistically over the longer-term, the strategies do tend to work out quite nicely.

Not only are you breaking through either support or resistance, it’s a well-known strategy so it has a bit of a “self-fulfilling prophecy” to it.

Beyond that, something that is of particular interest is that in general, consolidation patterns will see gains or losses of the same height of the pattern itself.

In other words, if the consolidation area is $0.50, you should see a move of another $0.50 once we break out of that pattern. You will find that the $0.50 move will be found in both a bullish breakout and a bearish breakout, as it is simply a “measuring stick.”

In Forex, a lot of traders like using fractals. Trading Fractals is a Forex Day Trading Strategy. Fractals are simply a five bar reversal pattern. This is not the same as you see in complex mathematics, it is simply a five bar pattern that features a middle bar that is extreme.

In other words, in a bullish fractal there are two candles going higher, but with the most bullish candle and the “highest high” in the third candle, while the fourth and fifth candles are lower than that one. Then a bearish fractal, the exact opposite is true, with the middle candle being the “lowest low” of the five candlesticks.

There are fractal indicators built into most platforms, the idea is that once you form a fractal, you have the likelihood of a complete reversal. On short-term charts, this can get a bit messy so most Forex traders who use fractals will use at least 15 minute charts.

On the attached chart, you can see clearly that the Swiss franc/Japanese yen pair had formed several fractals that offered short-term trading opportunities. Most of the time, you are looking for fractals that go with the longer-term trend. 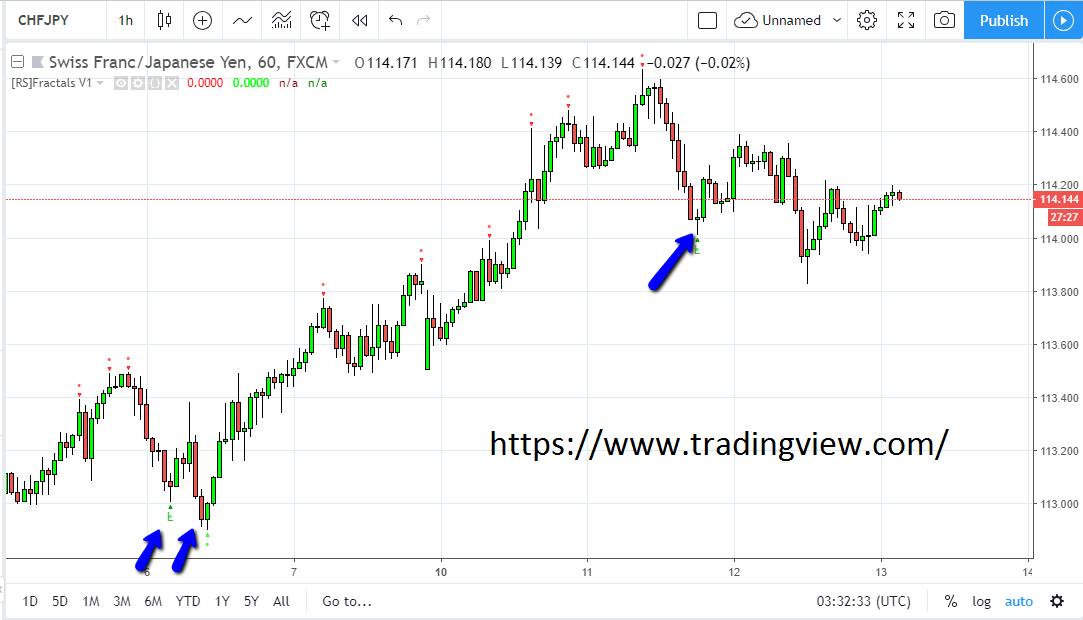 In this example, the pair had clearly been in and uptrend, and you can see by the annotations on the chart there were a couple of different entry points that could have got you in the move higher that we see on the chart.

Most Forex traders will use some form of a fractal scalping strategy, even if they don’t understand that’s what they are doing. It is simply recognizing when a market is bouncing or pulling back. As a general rule though, you will always be better off following the longer-term trend.

While a fractals trading system can work with any market, it seems to be more aligned with Forex trading for whatever reason. However, you can go through the stock charts and see how fractals can come in handy in those markets as well.

After all, when you’re looking at fractals, you are simply trying to identify when the market has shown an extreme high or low and is correcting itself. Fractals exploit the idea that markets get out of balance occasionally, and they are typically self-correcting.

After all, when an asset becomes too expensive, price needs to come down to find more buyers. Ultimately, when things become too cheap people will step in and start buying more of them.

One of the biggest mistakes that new traders will make when learning to day trade is to over complicate things. As you can see by the strategies, simple and effective strategies can work.

My personal favorite is the gap and go strategy, followed by the opening range breakout trading strategy.

Most of it is going to come down to whether or not you implement them correctly, and of course keep your discipline intact. Far too many new traders will flood the charts with massive amounts of indicators, causing more confusion than anything else.

The VWAP is another popular day trading strategy. Please consider reading the VWAP trading guide for more insights on how to use the indicator for creating a strategy.

The great thing about the strategies is that they are employed by traders around the world and followed widely. This means that there are other people out there trying to accomplish the same thing, which moves the market in your favor.